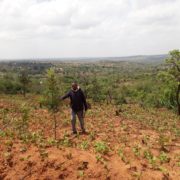 Timothy Masai, a 40year old man, is a pastor in one of the churches in Musengo location and a member of Musengo SOFDEV.

Solidarity Fund for Development (SOFDEV) is a rural microfinance model designed to respond to the financial need in rural settings. The model provides a platform for the rural communities to mobilize their financial resources in form of members’ savings and redistribute as microcredits for social and economic development activities. There are currently six units in Eastern Kenya supported by Inades Formation Kenya through the partnership with Bread for the World.  Timothy joined SOFDEV in 2014 amid a lot of reservations following his disappointments and limitations with other community financial groups. Pregnant with the desire to develop himself as a young family man, Timothy, married with one child, was however unable to access a substantive amount of money to purchase his own parcel of land and do farming as he had desired.

Timothy’s confidence in the group was built when he attended his first AGM and realized that Musengo SOFDEV governance structure and management of its financial resources was solid as compared to other community financial groups in the region. He started with borrowing small credit amounts to validate his observations and by 2015 Timothy had completely gained confidence in the group. In the same year Timothy, was elected as one of the officials. In 2016 he started building his share capital further in order to borrow some substantive amount to achieve his dream of purchasing his own parcel of land. Timothy was able to get in an agreement with the owner of the land that he would pay for the land in two instalments of each Kshs. 200,000. This he was able to do between 2016 and 2017 he is currently finishing up on repaying his second loan. He then accessed more money from a different source to start farming on his land and hopes to do all that he has desired for his family and also ensure the Musengo SOFDEV management is accountable in day to day operations. Timothy expresses his sincere gratitude to SOFDEV and envisions a brighter future for himself and his family of two children. 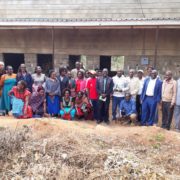 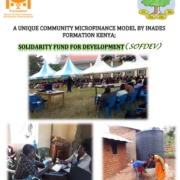 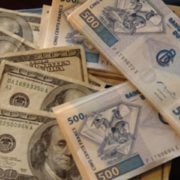