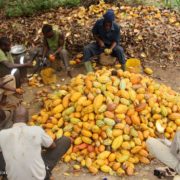 Organic cocoa farming is a fact of life in Côte d’Ivoire. For the last decades, several organizations, institutions and even the Ivorian State have been promoting this initiative, which aims to reduce and stop the use of chemical inputs in cocoa plantations, because these chemical products not only increase the producer’s costs, but also harm the producer’s health as well as the biodiversity.

Inades-Formation Côte d’Ivoire remains the pioneer organization among the organizations involved in this dynamic. Indeed, it has provided support to cocoa producers members of the Société Coopérative Equitable du Bandama (SCEB) based in M’Brimbo (S/P) Tiassalé in the Agnéby-Tiassa region since 2007. This initiative is part of a programme to help improve the incomes of cocoa farmers in the Agnéby-Tiassa region through their sustainable positioning on the organic cocoa market.

To this end, several actions have been undertaken by Inades-Formation Côte d’Ivoire on mastering the specifications of organic and fair cocoa production with a view to certification, marketing support, and improved governance. With 38 organic cocoa producers in 2010, CSEB currently has 138 members. It has two (2) functional internal control systems in M’Brimbo and Ahouakro. CSEB gradually increased its exports from 13.66 tonnes in 2010 to 71.28 tonnes in 2017. This growth is due in particular to the stability of the price to producers guaranteed by a European buyer. Organic cocoa is bought today from the producer at 1,350 F.CFA/Kg. The margin earned has enabled several producers to improve their habitats, acquire new motorcycles that make it easier for them to get around, provide for their children’s schooling and support their families’ health costs.

The cooperative, as an entity, has contributed to the construction of the village maternity and primary school teachers’ housing. In recent years, it has provided subsidies to its members in the form of small agricultural equipment. Despite the small quantities exported compared to the large exporting cooperatives, CSEB enjoys a regional and international reputation that has enabled it to forge new partnerships. In addition to Inades Formation Côte d’Ivoire, it is now accompanied by AVSF and ICRAF. These new partners are committed to pooling their efforts to support SCEB in its new challenges and enable it to position itself sustainably on the organic market by extending the social base, improving cocoa plantations productivity, improving bean quality and strengthening governance.

Launching the Project to Support the Strengthening of Resilience and Peaceful...

Women caterers in Côte d’Ivoire committed to the promotion of sovereignty...
Scroll to top