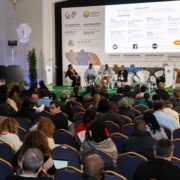 More than 250 participants from 66 countries around the world, including representatives from various governments, international organisations such as FAO, IFAD and ILC, agricultural and rural development associations, research centres, cooperatives, trade unions and other civil society organisations came together during the 6th Global Conference on Family Farming, which was held between 25 to 29 March in Derio-Bilbao.

The Conference focused on the development of the global Action Plan for the Decade of Family Farming 2019-2028 declared by the United Nations at the international level and also at the local and regional level around the world. The Decade’s ability to encourage the development and implementation of National Action Plans (established in all countries by governments, agrarian organisations, National Committees of Family Farming and other actors) through concrete and solid commitments to significantly improve public policies in favour of family farming, is key for the Decade to meet its objectives and allow us to ultimately achieve the SDGs.

The VI Conference had two internal working sessions prior to the institutional opening on 27 March; the first (25 March) involved an exchange session between Family Farming organisations and the second (26 March) was dedicated to working sessions for young farmers and women farmers.

During the main days of the VI Conference, attendance was high and there was exceptional media coverage. It should be noted that 27 media outlets that have the largest audience covered the event.

Following the introductory remarks by Marcela Villareal, Director of Partnerships Division of FAO, and Ashwani Muthoo, Director of the Global Engagement and Multilateral Relations Division of IFAD, at the institutional opening on Wednesday, 27 March, was attended by Lehendakari Iñigo Urkullu (President of the Basque Government), accompanied by José María Zeberio, President of the World Rural Forum; Josefa Leonel Sacko, Commissioner for Rural Economy and Agriculture of the African Union Commission; Mario Arvelo, President of the United Nations Committee on World Food Security (CFS); Fernando Miranda, Secretary General of Agriculture and Food from the Ministry of Agriculture, Fisheries and Food of the Government of Spain and Leonard Mizzi, Head of Unit C1, DG DEVCO of the European Commission.

That same day, the National Committees of Family Farming (NCFF) worked hard to ensure that their proposals were included in the Action Plan for the Decade. NCFFs are platforms created as a result of the IYFF-2014 that bring together agricultural organisations (which in many cases lead these Committees), associations, research centres and, in various instances, government bodies. NCFFs from 38 countries had the opportunity to meet at this conference.

On Thursday, 28 March, Gabriel Ferrero, Director General of Sustainable Development Policies of the Ministry of Foreign Affairs and Cooperation of Spain, gave a presentation on the Decade of Family Farming and SDGs. During the day, the working groups’ results of the previous day were made available, and the WRF as well as the people and entities that have made it possible to celebrate its 20th anniversary this year were honoured.

The VI Conference resulted in a final Declaration of Family Farming Organisations and Civil Society Organisations, established by the World Coordination Committee of the IYFF+10 and open for signature by all organisations, in which Governments and the International Steering Committee of the Decade are asked to highly consider the results obtained during these days of global efforts in Bilbao.

The VI Global Conference on Family Farming has made a significant contribution to the process of the Decade of Family Farming, which will be officially launched in Rome from 27 to 29 May. As of 30 May, a phase to fully implement the Decade will begin. It is essential in order to substantially improve the quality of lives of farmers across all five continents.

In 10 years, the world will be very different, it will have made progress in terms of public policies, it will recognize family farming as the key actor in achieving the sustainable development goals, taking into account the coexistence of sustainable food systems and family farmers in the aim of a favourable future. This is the shared aspiration that comes out of the discussions in Bilbao and family farming organizations have promised to continue their efforts as guardians of the Decade of Family Farming. 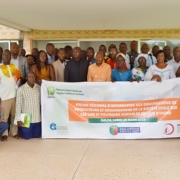 11th National Forum of Togolese Farmers: Fonio in the spotlight at the Inades-Formation...