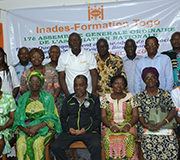 Inades-Formation Togo held its 17th Ordinary General Assembly on 21 and 22 April 2017. It was around the theme: “What commitment do members of the National Association make to the common good? “. The work mainly devoted to the presentation of the management report, have taken resolutions with a view to revitalizing the Association.

The work of this 17th General Assembly focused on moral, financial, technical or business reports, as well as on the report of the statutory auditors. All this work was the subject of debate, followed by a look at the day of reflection organized the day before.

The day of reflection focused on the involvement of partners in the service of the common good. This day enabled the partners of Inades-Formation Togo to take ownership of the resolutions adopted at the international conference held in Abidjan in November 2016. It also allowed all the stakeholders to identify some aspects on which l The association will be able to intervene in the coming years.

The results of this meeting contributed to the work of the general assembly, which took resolutions aimed at the re-founding of the association, its repositioning and its dynamization. They concern the management of the common good, the valorisation of local resources, the involvement of young people within the association, the contribution of members to the project of Inades-Formation society and the true commitment of the partners To the transformation of Togolese companies.

For the Director of Inades-Formation Togo, Mr. Sena Kwaku ADESSOU, it is a question of working towards a shared ideal. He believes that people have access to food and that they can also work to conserve the natural resources that are actually the basis of economies.
His association says he wants to make people feel comfortable in the fact, eat three times a day and in a healthy way, and to ensure that we can work in security and democracy.
At the level of the peasant world, it is necessary to see how resources can be harnessed to boost income-generating activities.

In opening the proceedings, the Chairman of the Board, Mr. Wallace Edoh Koumako, thanked all participants for their availability for the cause of the rural world.

Reducing the exclusion of people with disabilities
Scroll to top