The Farmers in the cantons of Sissiak and Doukpergou in Togo are developing collective agricultural entrepreneurship around organic inputs.

The massive use of chemical inputs leads to pollution of water, soil and the atmosphere. Indeed, in recent years, the intensification of the use of chemical inputs and the trend towards monoculture have endangered the ecological balance. They destabilize the reproductive capacities of soils and the preservation of plant and animal species, and the climatic environment.

In the savannah region of Togo, particularly in the cantons of Sissiak and Doukpergou, agricultural producers are suffering from the consequences of the loss of fertility of agricultural land and the degradation of natural resources. The consequences are, among others (i) a fall in crop yields with the corollary of recurrent food insecurity; (ii) a reduction in producers’ incomes and thus a remarkable inability of producers to meet, without being indebted, certain household needs; and (iii) a loss of woody species useful to man and his environment. In cereal and market garden production, there is also an increased and inappropriate use of mineral fertilizers, whose response often remains weak and limited in time, and a widespread use of herbicides and other pesticides whose origins are unknown.

Faced with these observations and negative effects, Inades-Formation has undertaken, since November 2013, to work on the promotion of food systems based on family farming, taking into account the stakes of agroecology.

It is within this framework that Inades-Formation Togo, in close partnership with the Regional Union of Savannah Cereal Producers’ Organizations (UROPC-S), is implementing the « Support project for the agro-ecological transition of family farms to improve the level of food sovereignty and income of producers in the cantons of Sissiak and Doukpergou in the Savannah region of Togo » with MISEREOR funding. In the implementation of this project, it is planned to set up two production and marketing units for organic inputs in the two beneficiary cantons.

A support mission of the General Secretariat (GS) of Inades-Formation was organized to accompany the project team and the beneficiaries in the construction of this economic model. It is a green economy model based on the development of collective agricultural entrepreneurship (ECAGRI) around ecological inputs.

This mission conducted from March 9 to 13, 2020 in Dapaong by Mr. Alphonse KOUAME, Food Systems Project Manager at Inades-Formation SG, supported by a national consultant, Mr. Tchoekewo MAKENOU, has helped lay the foundations of this pilot initiative on collective agricultural entrepreneurship around organic inputs.

The workshop organized for this purpose was attended by the Inades-Formation Togo project team, managers from UOPC (Union cantonale des organisations de producteurs de céréales) and UROPC-S, and a representative of ICAT (Institut de Conseil et d’Appui Technique, the national agricultural advisory service). This workshop was an opportunity for the participants to appropriate the contours of collective agricultural entrepreneurship (ECAGRI) and to adapt it to the case of organic inputs.

Two initiatives were visited in the field. They were the site of the Unit under construction at Sissiak centre, one of the two production units to be set up by the Inades-Formation Togo project, and the compost production and marketing unit of the Association Féminine pour la Propreté et l’Hygiène (AFPHY) in Dapaong. These visits allowed to exchange with stakeholders on current initiatives and to collect information and data in the field. This information helped to adjust or consolidate certain strategies or actions that had been defined during the work carried out in the workshop.

Among the main results obtained, we note (i) the choice of the type of organization to be set up in Sissiak and Doukpergou, it will be simplified cooperative societies (SCOOPS) which will be called Unit for the Production and Marketing of Organic Inputs (UPCIO): UPCIO-Sissiak, UPCIO-Doukpergou and definition of the operating organs and their composition; (ii) the choice of organic inputs to be produced; (iii) the estimation of the installation costs of the units; (iv) the elaboration of the commercial strategy for the UPCIOs. 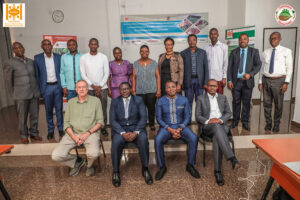