For nearly ten (10) years, Inades Formation Côte d’Ivoire has been involved in helping cocoa producers to improve their income through access to the organic market. These producers are therefore accompanied to the production of organic cocoa without chemicals.

This initiative, launched with the Equal Cooperative of Bandama in the region of Agnéby-Tiassa, has given satisfactory results in terms of improving the incomes and the living conditions of the beneficiaries.

Today, other Organizations of Agricultural Producers are interested in this system of production of organic cocoa and prospects of diversification of the customers exist.

The direct beneficiaries are Organizations of Agricultural Producers (OPA) of cocoa from the region of Agnéby-Tiassa interested in the production of organic cocoa. They are the Equitable Cooperative Society of Bandama, the Cooperative of the Cocoa Producers of Taabo and the Agricultural Cooperative N’Zaraman of N’Douci.

The strategy is based on capitalizing on the accompanying experience of the SCEB (Société Coopérative Equitable du Bandama) with a view to extending the principles of organic certification to new cooperatives in a spirit of continuous improvement of the interventions. It will be a question of being able to respond effectively to the needs of the market through the improvement of the production, post-harvest and organizational practices of agricultural farmer organizations.

The project is part of the overall framework of the Government Program “Youth Employment and Skills Development”, which aims to improve employability and entrepreneurship. The program comprises three (3) components:

Inades-Formation Côte d’Ivoire intervenes at Component 2 level and has the task of accompanying 700 young people, including 366 men and 334 women in the regions of the Great Bridges and the Agnéby-Tiassa.

The tasks of Inades-Formation Côte d’Ivoire are to help the beneficiaries in the development of business plans in order to select the best 700, taking into account economic opportunities and value chains with high potential in sectors Agro-pastoral sectors and to strengthen the capacities of the beneficiaries in techniques specific to the sectors concerned by the selected business plans, commercial management and financial management.

The beneficiaries of this project are mainly young people from urban and rural areas that are vulnerable, at risk (graduates, unemployed or underemployed, out of school, or out of school, looking for work), who have a project idea and Aged between 18 and 35 years. 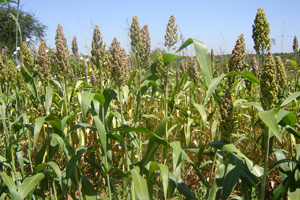 Promotion of sovereignty food through the development of agricultural collective entrepreneurship around fonio, millet and sorghum sectors in central and northern Côte d’Ivoire

Inades-Formation is committed to promoting food systems based on family farming. At all times committed to peasant agriculture, this choice has been motivated by the persistence of food crises in the world and especially in Africa, climate change and its consequences, the threat of agro-business which dispossess small producers, The tendency towards standardization of food systems that exposes the populations of the South to the loss of dietary diversity and makes them increasingly dependent on export products.

Faced with this sad picture, it is essential to work for the conservation of the food sovereignty of the countries of the South. Everything that passes through the promotion of food of sovereignty and the agro-ecological transition.

It is to this end that the project to promote food for sovereignty is launched to ensure a sufficient, healthy and sustainable population.

In addition to training, experimentation and sharing of experiences in good farming practices, effective start-up strategies, awareness raising and consumption of sovereignty food, advocacy for the development of family farming, Actions to increase access to financing for producers through the development of community microfinance structures based on solidarity within the community.

Foods of sovereignty are food products of vegetable and animal origin, historically anchored in the food habits of the populations of a given region, in trade, in cultural practices. They are known for their resistance to climate change, their nutritional quality, their low dependence on synthetic inputs and their important role in boosting the local economy. A total of four (4) food crops were selected for all the countries concerned: Bean / Cowpea, Sorghum, Fonio, Mil and one (1) livestock product: local chicken.

Three (3) crops of sovereignty will be valued in Côte d’Ivoire in the regions of BAGOUA (Tengrela), TCHOLOGO (Ferkessédougou) and GBEKE (Bouaké) namely fonio, millet and sorghum.

In previous years, Inades-Formation Côte d’Ivoire carried out actions to revive the interest of the Tengrela populations for the cultivation of fonio and to improve its production. This project will thus consolidate the achievements and continue the

The direct beneficiaries are mainly producers, sellers, processors and consumers of fonio, millet and sorghum from the project implementation areas. Certain aspects of the project will also affect the members of the 4 Fonsdev already existing in the regions of South Comoé and Gbêkê.