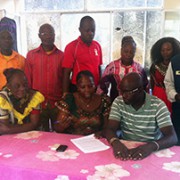 “A land security for a security / food sovereignty Kongo Central”

Read the statement by the President of the FOPAKO, surrounded by the other members of the OKCF

Farmers’ organizations and civil society members “OBSERVATORY ON LAND KONGO CENTRAL abbreviated OKCF” met from 27 to 28 May 2015 in Matadi in the context of the validation workshop of the diagnostic study land issues in Kongo Centralont, at the end of this workshop, made a statement.
In this statement, “A land security for a security / food sovereignty Kongo Central,” the OCKF is particularly concerned about the land and agricultural situation in Central Kongo regarding access and sharing natural resources and expresses its strongest protest with the manner in which access and sharing of land resources are defined and practiced.
The OCKF is committed with determination to require consideration of the interests of local communities and not have to stop acting as the peasant movements of Kongo Central for the rights of local communities.
It calls on governments at national and provincial level in compliance with international commitments to which they subscribed for access and security of land and the promotion of food security;
and invites organizations of Producers, NGOs activities, consumer organizations for permanent vigilance to prevent the kidnapping of family farming and thus reducing the peasants to poverty and misery.
Finally, OCKF made the following recommendations to the place of the national government, provincial and local authorities, the media and civil society for better land management, respects the rights of local communities.
The national government:
As part of the National Commission for Land Reform (CONAREF)

Lobby at CONAREF for the harmonization of laws on land, habitat, agriculture, forestry, mining for protection of rights of local populations.
Establish and monitor mechanisms to ensure the concerted management of rural land;
Take the steps as expected to address the gap between the constitution, land laws, custom and local practice in the enjoyment of rights of communities from ancestral lands;
The property rights of local communities is recognized and clearly defined under the constitution of our state the Democratic Republic of Congo;

A provincial and local agricultural policy is adopted to enhance the ownership and usage of local people and support the peasant land in dynamic materials.
That an inventory be made on land occupied by concessions and vacated following the bankruptcy of the nationalized companies;
That the land be massively cadastered on behalf of those entitled populations (the guardians of the land under the land law) so that an end to land grabbing phenomenon in the province by some national elites.

Awareness, inform and train communities and the public about land security and the phenomenon of land grabbing for an awakening of civic consciousness;
Operationalize and dynamic observatory on land which we, civil society organizations and farmer organizations are members.
Strengthen cooperation frameworks between the media and CSOs in the popularization of land laws;
Strengthening frameworks for consultation, discussion and action on issues of land access and security at the national level
Monitor the recommendations of this workshop.
Note that the statement is signed by farmers’ organizations of Central Kongo including two coalitions namely FOPAKO covering 12 administrative entities and includes 175 unions and associations OPA and 2320 and CRONGD which groups 32 local development NGOs.
Read the full statement and list of signatories

The processing of agricultural products to boost women’s incomes

The Solidarity Fund for Development (SOFDEV)
Scroll to top