Promotion of organic inputs: CILACS share their experience with their communities

From July to December 2021, Inades-Formation Côte d’Ivoire conducted the first phase of experimentation on organic inputs such as bokashi and ash broth on millet, fonio and sorghum. These experiments involved a farmer research dimension as they were implemented through seven (07) Community Innovation and Learning Circles (CILAC) in the central zone (Bouakaman and Bodokro) and in the northern zone (Niéllé and Tengréla). In each CILAC, two treatments (3 treated and 3 untreated squares) were conducted and observed according to a precise protocol on a 300m2 area.

At the end of this experimentation, four regional workshops were organized from June 27 to 30, 2022, respectively in Marabadiassa in the center, Tengréla, Niellé and Ferkessédougou in the north. These workshops, which took place in the presence of administrative and customary authorities and agricultural advisory structures, were attended by 220 people. 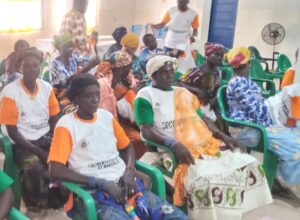 During these workshops, the CILACS members first explained the experimental system that was put in place. They then described the manufacturing process of the organic inputs being experimented with by listing the ingredients and their quantities. Finally, they presented observations made by comparing treated and untreated plots.

Regarding the level of insect infestation, Mr. OUATTARA Seydou, a member of CILAC in Dramanevogo in the north, testified that at the beginning, sorghum plants in plots fertilized with bokashi were more attacked by caterpillars. However, the attacks stopped without any treatment. This same producer explained that sorghum harvested from fertilized plots can be stored longer and without difficulty. 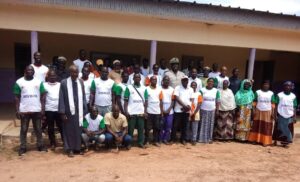 Despite these advantages, CILAC members still face challenges such as: the drudgery of making bokashi, the rising price of chicken droppings, and the high amount of boskashi needed to fertilize one hectare of land. The following solutions have been proposed:

In the future, CILAC members have developed a schedule for the second phase of experimentation with Bokashi as a fertilizer, ash to control partridges and cowpea powder to control striga. These experiments will be done in collaboration with a researcher and two students from the Peleforo GON COULIBALY University of Korhogo.

These restitutions were preceded by a presentation on the effects/risks of the use of synthetic chemical inputs in agriculture. The authorities present congratulated Inades-Formation Côte d’Ivoire for this initiative and urged the institution to work on making organic inputs available at low cost to producers in order to promote its use by a large number. According to them, this is the price to pay to reduce the use of chemical inputs and limit the risks to people’s health.

Some participants wished that there were spaces in each market dedicated to the sale of food produced without chemical pesticides in order to make a difference and guide consumers’ choice.

These workshops were also an opportunity to promote millet, sorghum and fonio-based dishes. In all the zones, the local women restaurant owners accompanied by Inades-Formation Côte d’Ivoire provided the catering service. 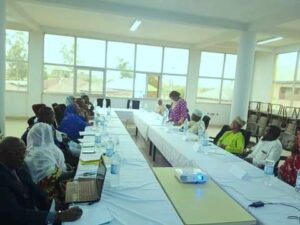 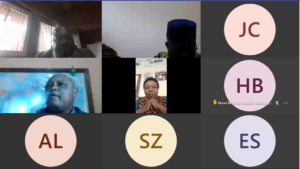 The actors of the project were gathered.

The coordination meeting of the Knowledge Cluster of Organic Agriculture in Central Africa (KCOA-PCAC) took place on September 5th. The exchange was mainly focused on